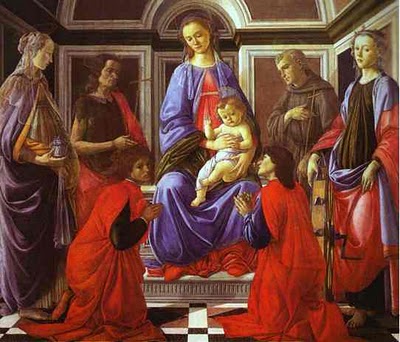 “Dating from around 1470, this painting is among the oldest of the altarpieces produced by Botticelli. The nineteenth-century location of the painting in the church of Sant’Ambrogio does not seem to have been its original site; rather, the presence of Cosmas and Damian suggests a connection with the Medici family, whom the two saints were supposed to protect.” Gregori page 89
Titled The Madonna and Child Enthroned, with SS. Mary Magdalen, Catherine of Alexandrira, John the Baptist, Francis, and Cosmas and Damian.